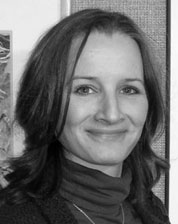 Art has been a passion for Katrina from a very young age; she remembers watching her mother paint and wanting to paint, too. Fortunately, throughout the years her parents encouraged her to pursue her art. She was first formally exposed to design and color concepts and the watercolor medium when she enrolled in a community college to pursue an Associate Degree in commercial art. From that beginning she taught herself to paint with watercolors and would wander around her neighborhood taking pictures of flowers and anything else that would inspire her.

The year 2003 was a year of change for Katrina. On a personal level her son Shane was born which brought new demands and responsibilities, and on a professional level she decided to master the medium of oils. Her subject matter and inspiration, however, didn’t change. She has always been interested in painting flowers because of their beautiful colors and autumn leaves with the sun shining bright and reflecting deep shadows and repetitive shapes. She continues to go out late in the afternoon when the light is most interesting, and walks the trails in a local forest or garden, taking photographs to bring back to her studio to help her recreate the feelings she had while walking the trails.

Over the last several years with two small children and those pesky cats, Katrina has found that she works the most during nap times (cats). The children understand that she’s working when she paints and she’s able to work up to eight hours a day. She often finds herself staying up late painting till midnight. Katrina usually has several paintings going at the same time and loves to work on a large scale.

Through her study of art, Katrina has been inspired from a vast range of styles, from the great impressionists to the amazing realists of the 20th century. "Artists such as Renoir and Degas, with their vibrant use of color, unique compositions, and amazing application of paint, left me so excited to explore my own interpretations of simple landscapes and portraiture." One cannot help but see similarities between her work and contemporary artists such as Chuck Close and Richard Estes....but with her own unique style and compositions in mind. "Robert Bateman, Joseph Raffael, and Chuck Close, all have very different styles; however, they have captured the essence of their subject matter in such uniquely different ways. Whether it be the mass scale of Close's realistic paintings or Raffael's use of color, I am continually inspired to reinvent myself and interpret the beauty I see around me in new ways."