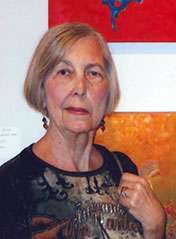 Carol Coppi has lived in Papillion, Nebraska, since 1973. Her Air Force husband retired there in 1977, and their three married children attended Papillion schools and area colleges.

Carol is a former president of Omaha Artists, Inc. (2001 – 2002) and an active member since 1980. She participates in club and area art shows and exhibits her work in local businesses. She has organized art lessons for Sudanese adults who are learning English through Metro Community College. Several members of Omaha Artists assist her in this rewarding project.

In 1983 and 1986 she released a calendar of pen and ink drawings with Papillion artist, Dottie Seymour. These calendars, Sarpy County Scenes, have been widely distributed and appreciated for their historic significance as well as artistic merit.

Carol enjoys sketching outdoors. Her appreciation of the Midwest has grown as many sketchbooks provide inspiration for her paintings and drawings. Her work requires patient observation to catch the “atmosphere of the place.” She wants her work to remind one of unnoticed things and capture a moment in time.